As specialisation increases in the building industry, manufacturers are devising means by which time and costs may be saved on the job. The installation of door jambs and doors is one area where factory pre-assembled units have increased in volume and a variety of designs have been marketed. This deals with a split jamb unit which enables the door jamb and door architraves to be installed as a pre-assembled unit. See below breakdown.

The term “split jamb” refers to the width of the jambs and the head being split along the middle to form two symmetrical parts of a door jamb unit. This allows the fixer to install one half of the unit from each side of the wall opening, which covers the joint with a door stop. Split jamb units are manufactured by specialist joinery companies and are delivered to the job fully assembled, ready to be installed. The latch set may also be fitted, but the door furniture must be fitted by the fixer on the job, because each manufacturer has their own design. This will require the carpenter to understand the relative installation literature prior to commencing fixing operations.

For a split door jamb unit to be speedily and economically installed, the door studs must be in line across the face of the wall. If the door studs are not in the same plane, the split jamb unit will be pulled out of shape as the unit is installed into position.

establish and mark the location of the hinge side on the floor, then measure and cut stiles to the required length. Now remove the spreader, door stops and separate the jambs. Packing should be used on the hinge side of stud top and bottom adjacent to the hinges. The four packing strips should be plumb, in line and equally spaced across the width of the stud as shown in the reference image below. Repeat packing on latch side. NOTE: The packing should allow the frame to fit easily into the opening. 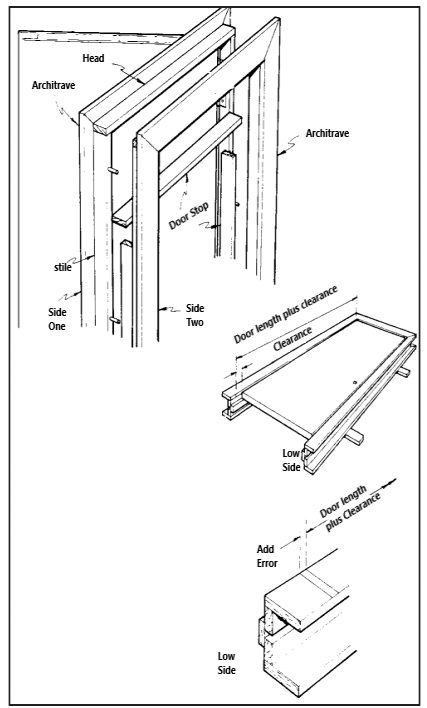 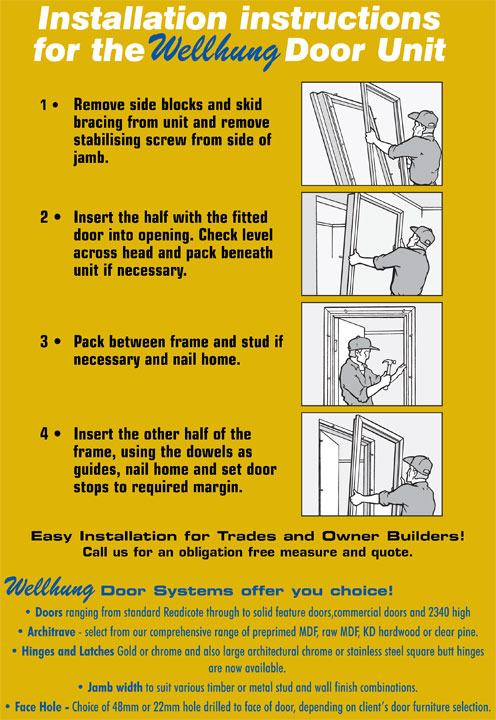